It won’t butter your toast, or do any of those unseemly things you do to yourself under the cover of darkness, but the Steam Controller will allow you to craft a solid, customizable gaming experience while playing anything that Steam can shake a thumbstick at. And that’s the rub; it’s not a spectacularly impressive device from the outset. Only when you dive into its customization options and conquer its learning curve can you truly appreciate what the Steam Controller does for PC gaming.

The first time you wrap your eager fingers around the controller’s contours, it might feel unfamiliar and somewhat bulky. The two protruding legs have an odd, bulbous shape that presses into your palms. Right away, this is somewhat unnerving, but after you become accustomed to the feeling, you’ll start to wonder why no controller incorporated this sort of hand support before now. I’m not a medical professional, much to the dismay of my disappointed parents, but I’d guess that it works the same way as a mousepad with wrist support, keeping your heavily abused joints and muscles relaxed in the midst of heavy gaming.

The general layout is very familiar; it’s the one all controllers have adopted since the PS1. There are four face buttons, two triggers, two bumpers, a thumbstick, and start and select. The notable additions are the two grip buttons; placed on either side of the battery cover on the back of the controller, the grip buttons can be easily squeezed in the midst of fierce action sequences, making them perfect options for jump, melee, or reload. In first person shooters, for instance, proper use of the grip buttons can make it so that you never have to move your right thumb from the trackpad to hit the face buttons, providing you with the advantage of time in those heated moments where every millisecond counts.

Though the built-in gyroscope isn’t a button, it’s treated as such in the settings, and is a nice little feature for anyone who likes racing or flying games and lacks the game-specific hardware. I tested out the gyroscope on Microsoft Flight Simulator X, and found it to work well enough.

The dual trackpads are highly responsive and impressive from the get-go, though using them will take some getting used to. You should expect to undergo a decent amount of experimenting with the various settings. And don’t expect the process to be a one-time thing. You’ll likely find yourself adjusting settings for every game you play. It might be overwhelming at first, but if you stick with the process you’ll gradually get better at navigating the various inputs until you instinctively know what you want for each new game. After you find your way around the settings and master what the controller has to offer, setup should only take a few minutes, along with a tweak or two now and then. This is true of the buttons as well, but to a lesser extent. Finding a useful binding for every button is much more intuitive to the average gamer than messing with completely unfamiliar trackpads.

The ability to select a button to use as a modifier is a nice touch. The grip buttons are most often recommended for the task, as they can be easily pressed in combination with virtually every other button. Doing so will open up your binding options for more complicated games, giving you twice as many available bindings. This will severely limit the number of curses you’ll expel from running out of available buttons to map on competing controllers.

Overall, after the learning curve is overcome, the Steam Controller performs wonderfully in most cases, with a few notable exceptions. The controller is marketed as a peripheral for playing PC games in the living room, just like you’d play games on a console. And in that sense, it delivers. The main issue with the premise, though, is that not all PC games lend themselves to a great living room-style gaming experience. If you’re playing a console port, then settle in for a great time. But if you’re playing a mouse and keyboard-heavy RTS like Civilization or Crusader Kings II, then you’re in for a serious trial of patience.

The main thing to remember is that while the Steam Controller excels at its mission, the mission can only be applied to games where common sense dictates that it should. Using the trackpad as a genuine mouse and clicking with the trigger buttons while sitting on the couch, no mouse or keyboard in sight, is a novel experience, without a doubt. But it gets old when you’re required to perform complicated navigational maneuvers, or use multi-button functions common in overhead map-style strategy games with seconds to lose. Highlighting groups of infantry can be a pain, especially when you have a limited time to respond before your forces are overrun. The mouse is still king when it comes to highlighting, dragging, and generally acting like a mouse. That doesn’t mean that you can’t play these games with the Steam Controller, just know what to expect when you do.

Mouse and keyboard players might also lament a slight lack of speed in first person shooters, at least relative to what they’re used to. While the Steam Controller is not a replacement for a mouse and keyboard, it certainly gets as close as possible via the innovative trackpads, and controller-friendly gamers will still appreciate the increased response time all the same.

PC Gaming in the Living Room 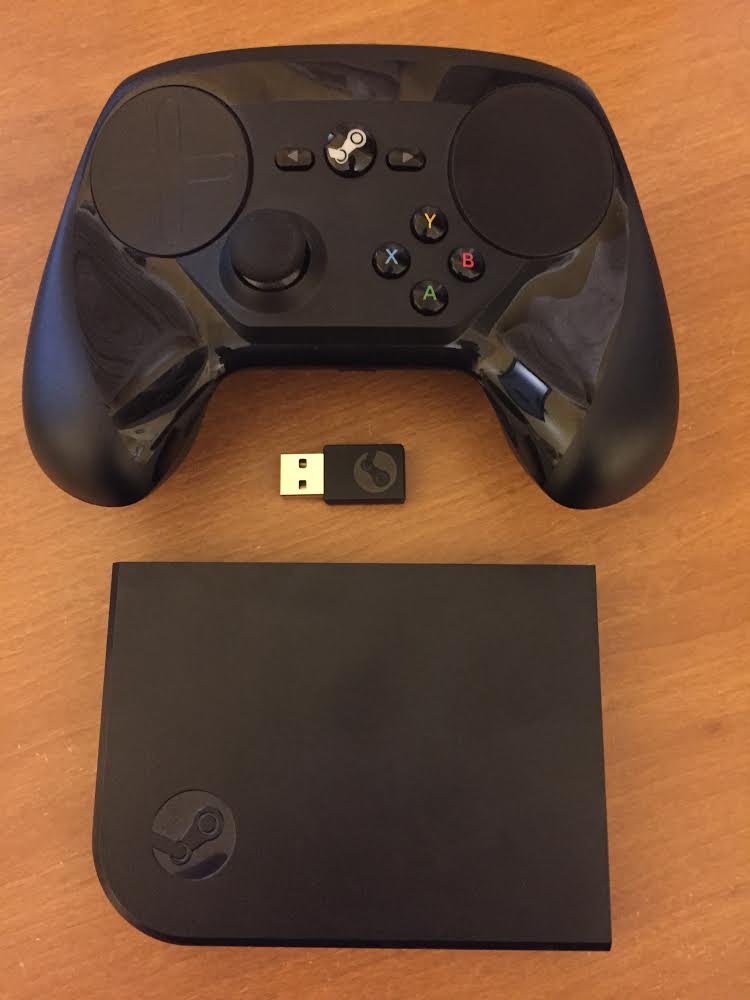 When used in combination with the Steam Link, the Steam Controller really shines. Of course, you can accomplish the same feat by hauling your tower to the living room, or via a Steam Machine like the Alienware Alpha, but Steam’s proprietary hardware does prove to be a great combination. Not to mention, much more affordable than purchasing a separate tower for gaming, or even a Steam Machine for use in the living room.

Steam’s Big Picture Mode turns the UI into a controller-friendly environment, making navigation inside the utility an easy process. Outside of Steam, though, the previously stated limits of using the controller as a mouse apply. That said, the option to do it in the first place is still rather refreshing. It’s nice to not have to carry your tower and peripherals back and forth between the various rooms of your house. Typing on the controller is a neat feature, too. Simply click on any text field or click the joystick to bring up a QWERTY keyboard. The keyboard is divided into two sections, each one allocated to the range of the right and left trackpads, respectively, and letters are selected by clicking the triggers.

It’s worth noting that the Steam Controller can also be used with non-Steam games and applications, as long as you add them to your Steam library and launch them through the utility.

It’s a PC controller built for gamers who use controllers, or for mouse and keyboard players who wish to get in on the living room atmosphere that console gamers have enjoyed for decades. It will not make you significantly faster at killing your friends in FPS games, and it might even lower your response time until you get used to using the trackpads. It won’t respond well to complicated games that better dish out the fun factor via a traditional keyboard and mouse. What it will do is enable you to play those games with a controller, if that’s what you’re used to. And it’ll give you an insane level of customization, providing you with complete control over a particular game when you do. The amount of trial and error necessary to tweak each game to your exact specifications might turn some people off, especially those controller users who are used to using the default settings. Overall, the Steam Controller delivers a unique experience and level of customization that you won’t find anywhere else.

For those who prefer to play games with controllers: 4.9 Swoops

Verdict: Worth a Flyby