For fans of the series and the books, it looks like CD Projekt Red has finally put out a game that does the lore justice. Admittedly, I had a problem with getting into the first two games, though I gave the second a more than fair shot. But the constraints imposed due to the lack of an open-world and the linear development didn’t sit well with me.

“Hey, run down this path, fight these things, and run right back down that path to town.”

Witcher 3 successfully breaks those chains in wondrous fashion, opening you up to a seemingly unending walk through a world populated by adult fairy tales come to life. The world of the Witcher series has always held a great degree of mystery. Its lore-soaked forests and caverns, powerful but flawed characters, and folk tale-inspired monsters give the universe a strong foundation that immediately immerses players in the story. It’s no surprise it succeeds at the fundamentals, beginning its life as a book of short stories by Polish author Andrzej Sapkowski. The story and the lore were already there, and CD Projekt Red just had to put the pieces in the right place. The first two games began a partnership between Sapkowski and CD Projekt Red, with the latter heavily drawing on the works of the former. With the Witcher 3, CD Projekt Red has really come into their own, masterfully recreating the world of the Witcher in a true work of video game majesty.

There was a brief moment in the White Orchard prologue where I feared that Witcher 3 would replay the failings of Witcher 2. All those fears were allayed, however, after traveling to Velen for the first time. It’s here, after the tutorial that you barely realize is happening, that the whole world opens up to your lustful soles.

The way that Witcher 3 approaches its open world is different than comparable games like the Elder Scrolls. It’s not just one contiguous map, but a map of individual areas, each of which contain their own miniature open worlds. Though I was nervous to learn this, CD Projekt Red definitely pulled it off. And each area is big enough that one can wander around in it without feeling constrained. There are also so many things to do at every turn -- new people to meet, monsters to kill, and contracts to accept -- that it feels as rich a world as any you may ever wander.

Combat in the Witcher 3 has been streamlined somewhat. There are still no stances, as in the first game, or complex button combinations, like in Witcher 2. And it looks better, too. I find myself itching to get into a fight with anything just to see the imagery etched into my mind from Sapkowski’s words on the big screen. The Witcher’s graceful yet practical style as he pirouettes around (read: not a Jedi from the Prequel trilogy), is just plain fun to watch.

There’s a brief learning curve, which gives the prologue in White Orchard a nice utility. Signs and other items are easier to access in the sweaty moments of a fight, and each have new functions to unlock and unleash. The Quen shield that recharges your health, if not for the cooldown, would be completely game-breaking. Anyone skilled enough at combat could dance adeptly around enemies until the cooldown finishes, then recover all or most of their health with the Quen shield whenever necessary. Though it’s almost impossible to come out unscathed when facing multiple enemies. And that’s something I like about Witcher 3. Combat is more skill-based, and the better you are at dodging, cleaving, and casting, the better your chances when times get really tough. There are no easy patterns or shortcuts that undercut the replayability of other games. Every new encounter is a chance to test your mettle anew. Since most monsters are vulnerable to different things, any witcher worth their salt is always reevaluating their battle plan.

Potions are much, much easier to use, and therefore much more useful. You can drink them straight from the inventory menu or the quick menu mapped to the D-pad, instead of having to meditate before the fight to do so. It’s a nice change, since you can’t ever be 100% certain what you’ll need before going into a fight.

The Wild Hunt is terrifying. It wasn’t at first, and I was skeptical of using it in the game, and I’d sort of figured CD Projekt Red had jumped the shark. But it works out pretty well. Overall the story flows well, and the consequences are deeply felt in future choices.

Side quests are numerous, and each of them offer decisions unique to their circumstances. Let the werewolf eat his wife’s sister, or don’t. Many of them find you making split decisions, with a depleting yellow bar letting you know that you have only seconds to respond. And whatever you choose will affect the outcome of the current questline in unique ways, and possibly the future of the game.

Quests never feel formulaic, even with the fundamentally repetitive nature of a witcher’s job. There are plenty of monster contracts to pursue, sure, but they all unfold differently and the majority of them have surprising circumstances and choices to consider. The non-contract quests are numerous and varied. Like negotiating with an angry god on behalf of the townspeople cursed by his wrath, or convincing a nice enough young fisherman to make out with a wraith. Each quest is entertaining and ultimately satisfying.

Even when it comes to the single area where most games get caught up: dialogue. Let’s be honest; games often have issues with dialogue, because, well, not all nerds have an MFA in creative writing. Don’t despair, because there aren’t any such problems here. The dialogue in the Witcher 3 is not only believable, it’s exceedingly well-written. And the delivery is great, too. You won’t find any lackluster voice acting in this latest installment. It’s honestly a rarity to find a game in possession of such a well-told story with great dialogue and delivery. Water spray resulting from a gallop through the creek looks simply incredible.

The game looks beautiful. Scenery is done extremely well, faces are realistic and expressive, and combat animations are fluid. There are a few glitches here and there, but for the most part, Witcher 3 is a gorgeous game.

There are issues with wispy things like hair and leaves. These look stiffer than they should, and don’t quite flow in the wind the way they should -- even though there seems to be a constant movie-style fan blowing in Geralt’s face at all times, causing his white locks to wave during every conversation. 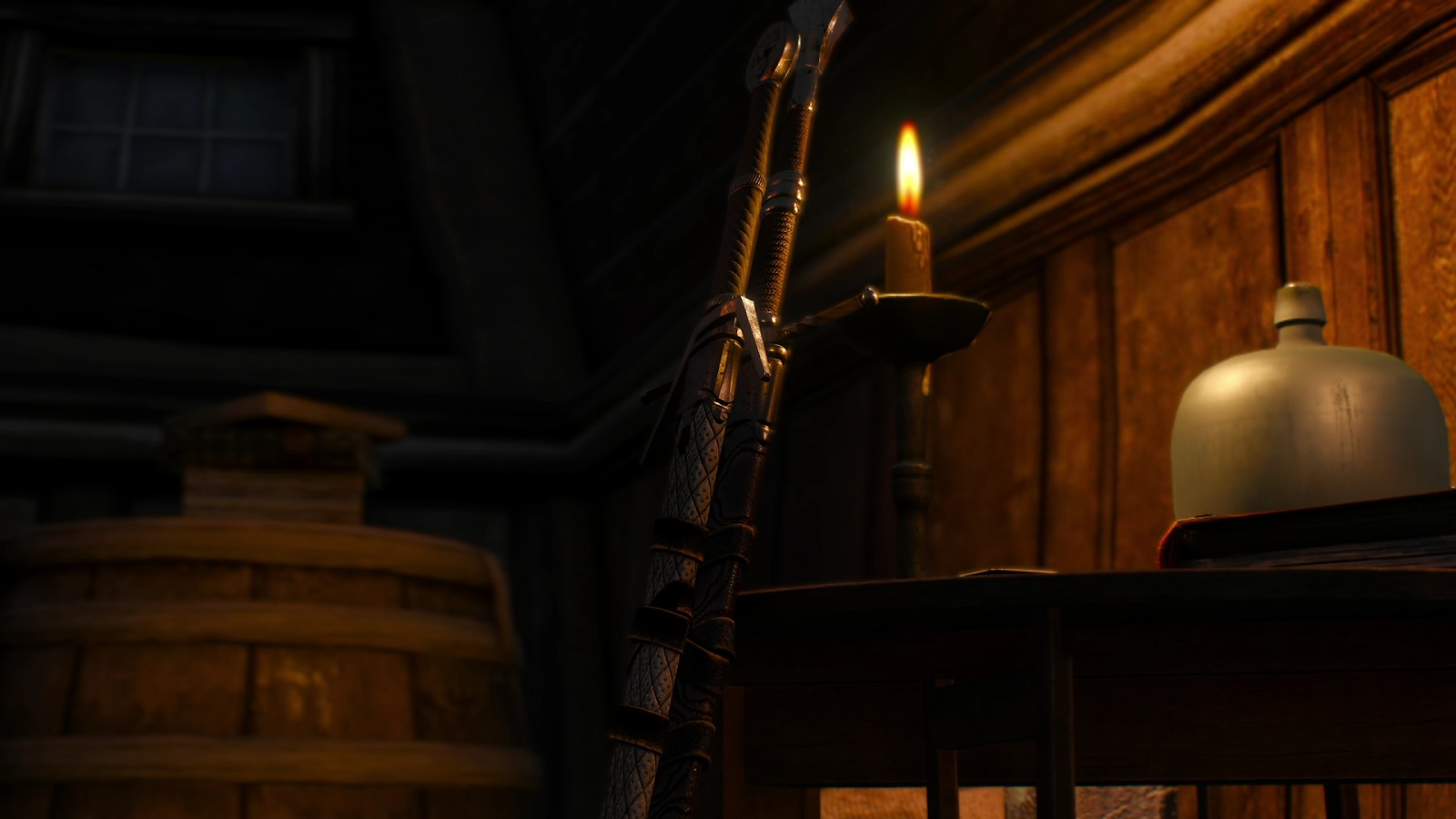 Glitches are minor, and usually occur while standing on something you shouldn’t be standing on while attempting to loot a crate nudge behind other crates, or while standing on thatched roofs. Every now and then though, you’ll come across something a little stranger, like this horse caught in a tree galloping at full speed as if on an organic vertical treadmill: I couldn’t talk about the Witcher 3 without also discussing its featured minigame, gwent. If it weren’t for most every other aspect of the game really shining at every level, gwent could have stolen the show. The card game plays like a combination of Magic: the Gathering and Castle Panic. Cards are divided into four different decks and spread far and wide throughout the world: the Northern Realms, Niflgaardian Empire, Scoia’tael, and Monsters. Your goal is to beat everyone you meet at gwent, upon which event they will give you a new card, and complete your decks. Cards can also be purchased from merchants -- usually the same people you’ll proceed to destroy at the game and claim their prize card. There’s a gwent tournament, and there are even gwent quest lines, where you seek out better and better players with the help of key characters you’ve just beaten.

The Witcher 3 is full of easter eggs. Once, in the dank cellar of a fort I ran past two guards doing lines from Pulp Fiction. One of the gwent cards, an archer, references Skyrim in its description, “I aim for the knee. Always.” Witcher 3 contains a pretty spectacular collection of references, and because the world of the Witcher is an amalgamation of various lore and real-world elements, it in no way feels like pandering or lessens the experience. The hype for this one was strong, but justified in the end. Witcher 3 is one of the better games of 2015, if not among the best of the last decade. The game deserves every one one of its 800+ awards. If you’re a fan of open-world adventure games with deep characters, moral flexibility, and intensely satisfying combat, then this one’s for you. If not, well... Overall Rating: 5 Swoops out of 5

For anyone with a pulse: 5 Swoops

Verdict: This one’s not a hard choice. The Witcher 3 is simply masterful at every level. The game is a spectacular, story-driven, open-world experience and it’s not to be missed.