Furi begins with your nameless, anime-esque character strapped into a giant torture device while the enigmatic Jailer delights in sadistically electrocuting you into oblivion. This scene continues for what feels like the duration of an entire Tarantino movie before Frank the Bunny (I assume this is not his real name, but it’s hard not to make the comparison) convinces you to break free and kill the Jailer. More cryptic exposition ensues as you (very) slowly walk out of the cell to confront your captor.

Futuristic electric chair notwithstanding, this is when the real shock sets in. After the agonizing slowness of the approach, the combat is blazingly fast. It plays like a mix of button mashing action game, twin-stick shooter, and bullet hell shmup and is incredibly fun and exhilarating at its best moments.

The game consists solely of boss fights, which play out in a standardized loop. You fight through one phase of the battle, attempting to survive the enemy’s current moveset while chipping away at their blue health bar with your sword and gun until it is completely red. At this point, they become stunned and an orange symbol appears beneath them indicating that it’s time to smack them in the face and initiate part 2 of the loop. You then enter into close quarters combat within a small circle that you can not exit. Your gun is also disabled during this phase, so it’s all up to your dodging and blocking skills to create openings to rush in and unleash a flurry of sword attacks. If you manage to reduce the boss’s red life bar to zero, a brief cutscene is triggered, the boss loses one of the red blocks beneath his/her lifebar, you are restored to full health and granted an additional life (the green blocks beneath your health bar), and the cycle begins anew with your opponent generally becoming faster, angrier, and more diverse in their attack patterns. If you fail in the close quarters combat, however, you lose a life and must replay the entire phase from the beginning. 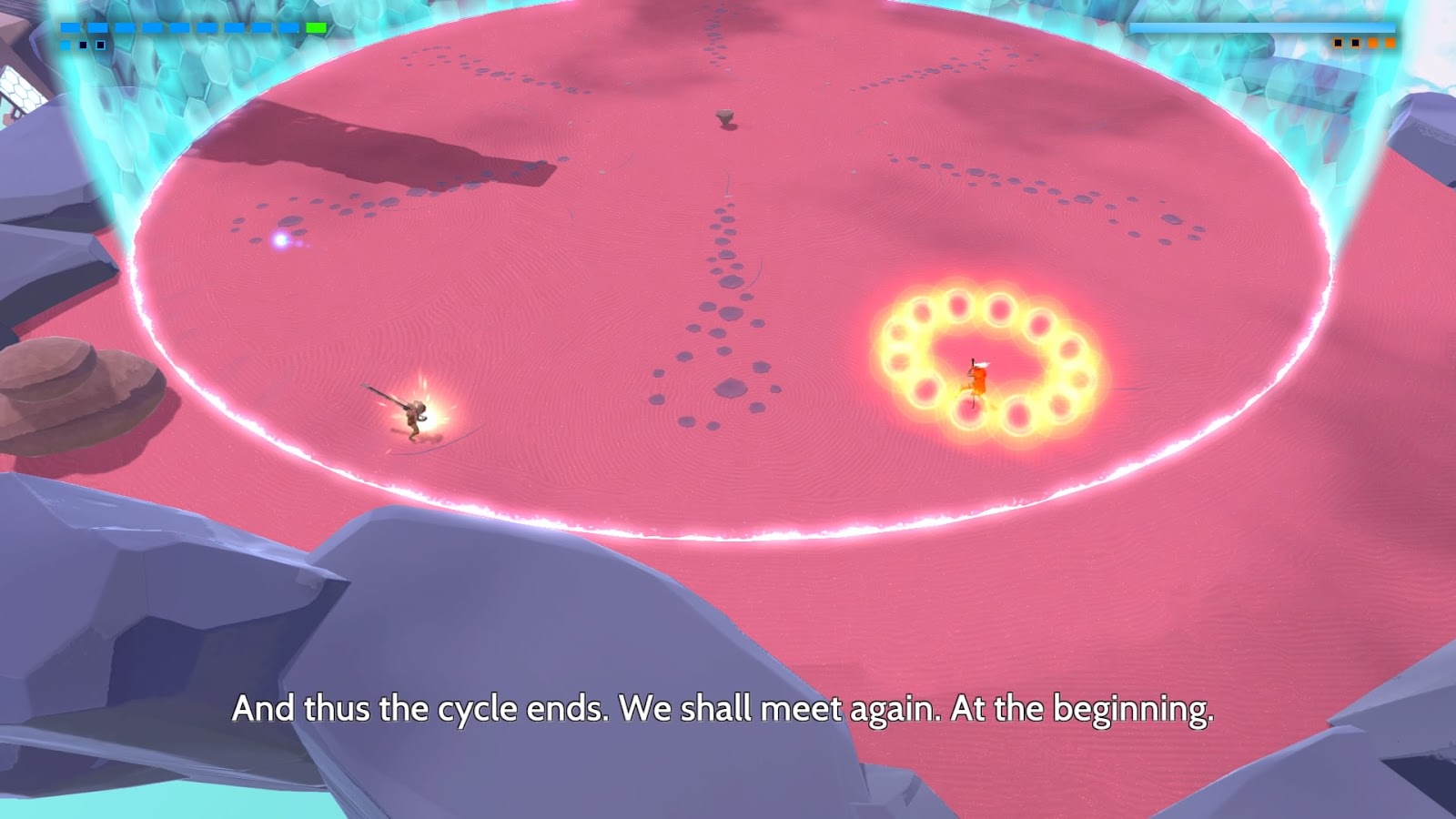 And we did. Again and again.

Being knocked back to the start of phases not only makes the fights last a ridiculously long time, but can create immense frustration when one missed block means having to repeat the last five minutes of gameplay. This is particularly irritating in the light of the extremely unwieldy blocking mechanic. Enemy melee attacks are preceded by a white flash that is meant to signal you to block, but there is something odd about the timing between the flash and the actual attack that makes it nearly impossible to synch their downswing with your extremely brief parry animation. 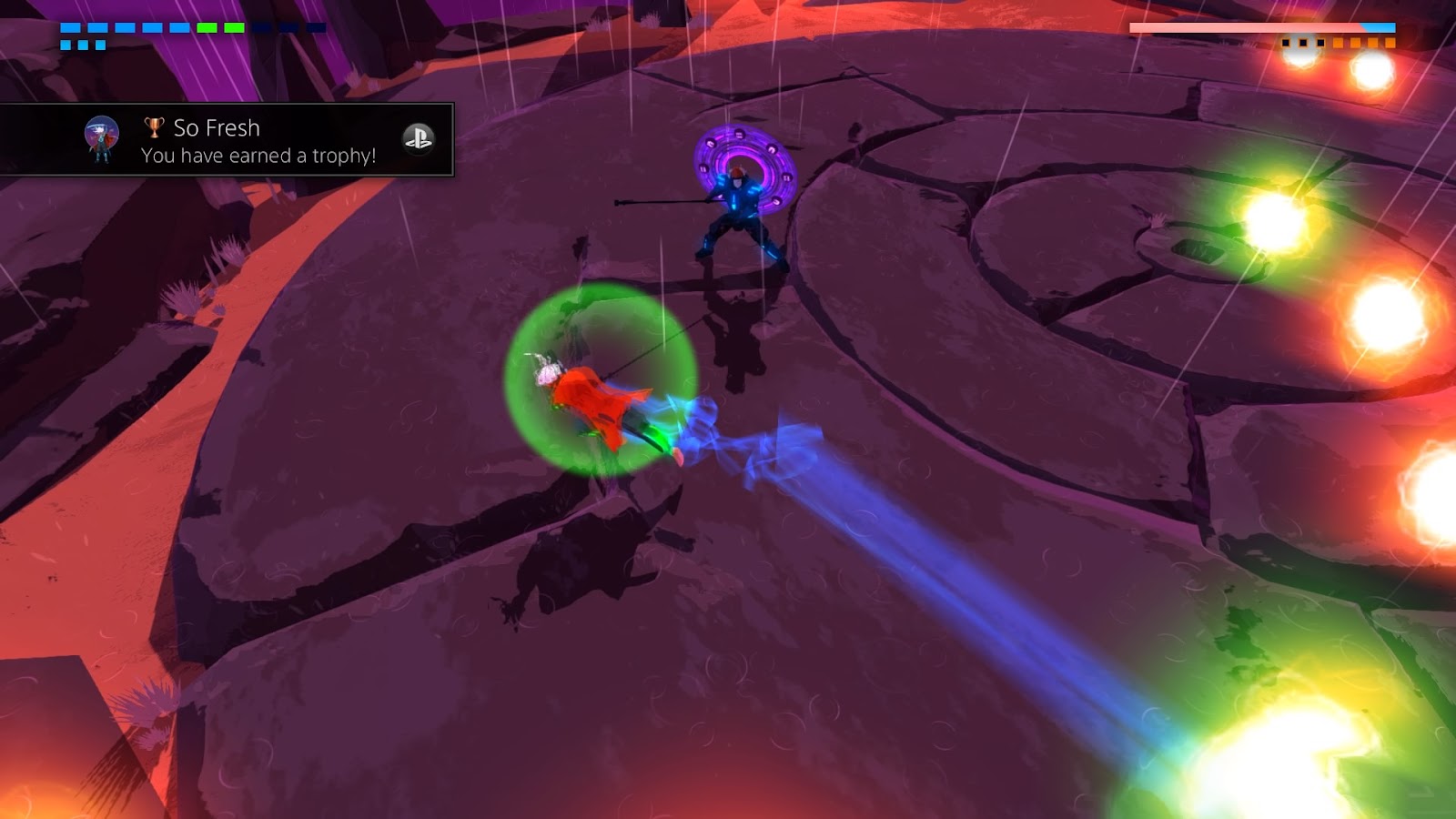 In the unlikely event that you manage to block a melee attack, you’re rewarded with a pretty green flash and a chunk of replenished health.

Once you manage to finally defeat a boss character, Frank (again, probably not his real name) shows up to lead you to your next encounter. He waxes philosophical on society, entwined fates, and the effects of imprisonment on the psyche as you wordlessly trudge along like a weary turtle through what are admittedly some of the more beautiful and interesting landscapes I’ve seen in a game. After several minutes of this, you arrive at the domain of the next boss and begin a new fight with new tricks and patterns to learn, the variety of which keep the gameplay fresh and engaging. One boss even slows time to a crawl, rendering your gun useless as its energy blasts hang motionless in the air. 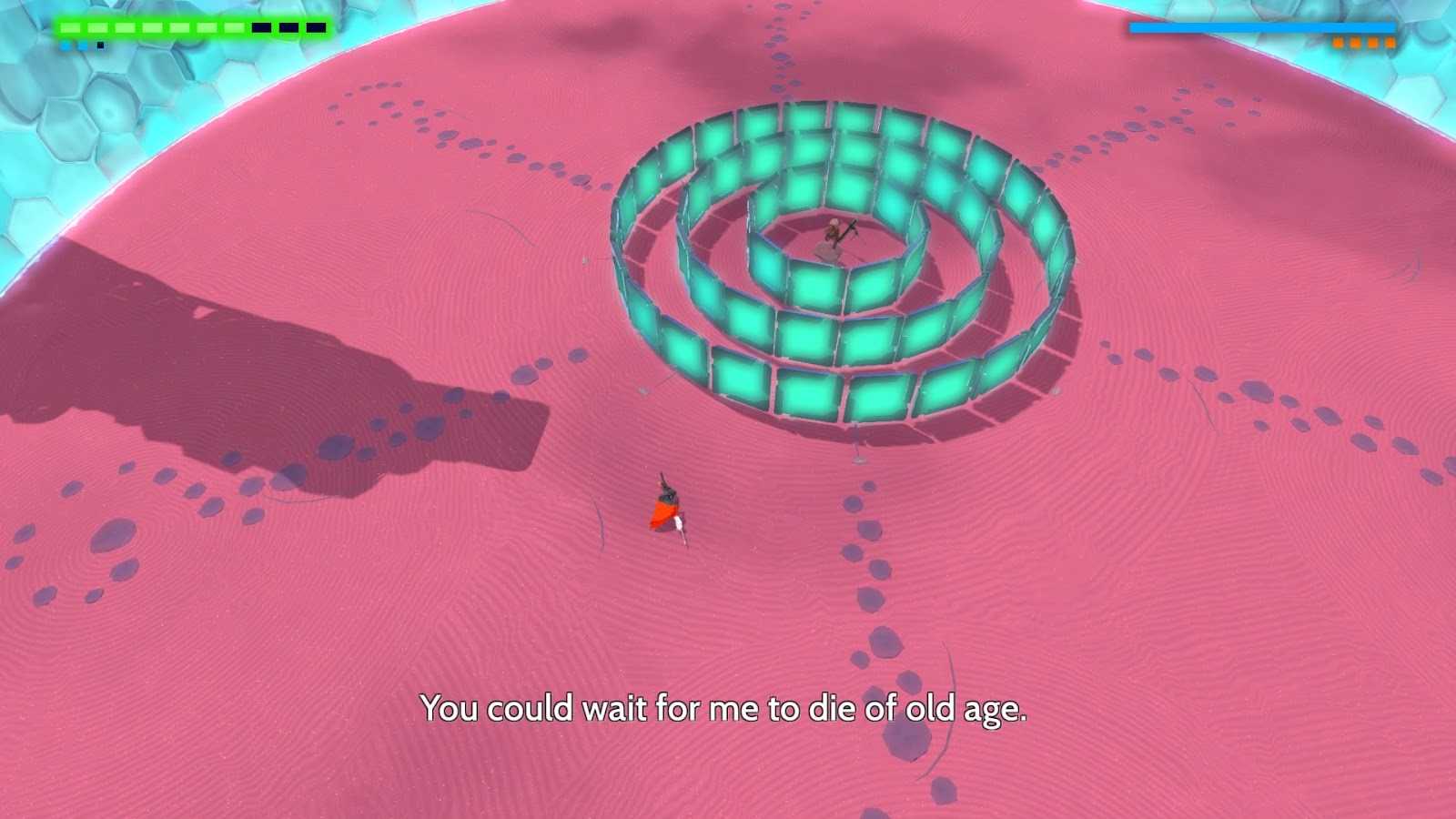 I gave this strategy serious consideration.

It is very difficult to love Furi with all its faults, but just the same I think it’s nearly impossible to hate it. It does so many things well and as frustrating as it can be at times (every play session essentially ends in a rage quit), it keeps you coming back for more. 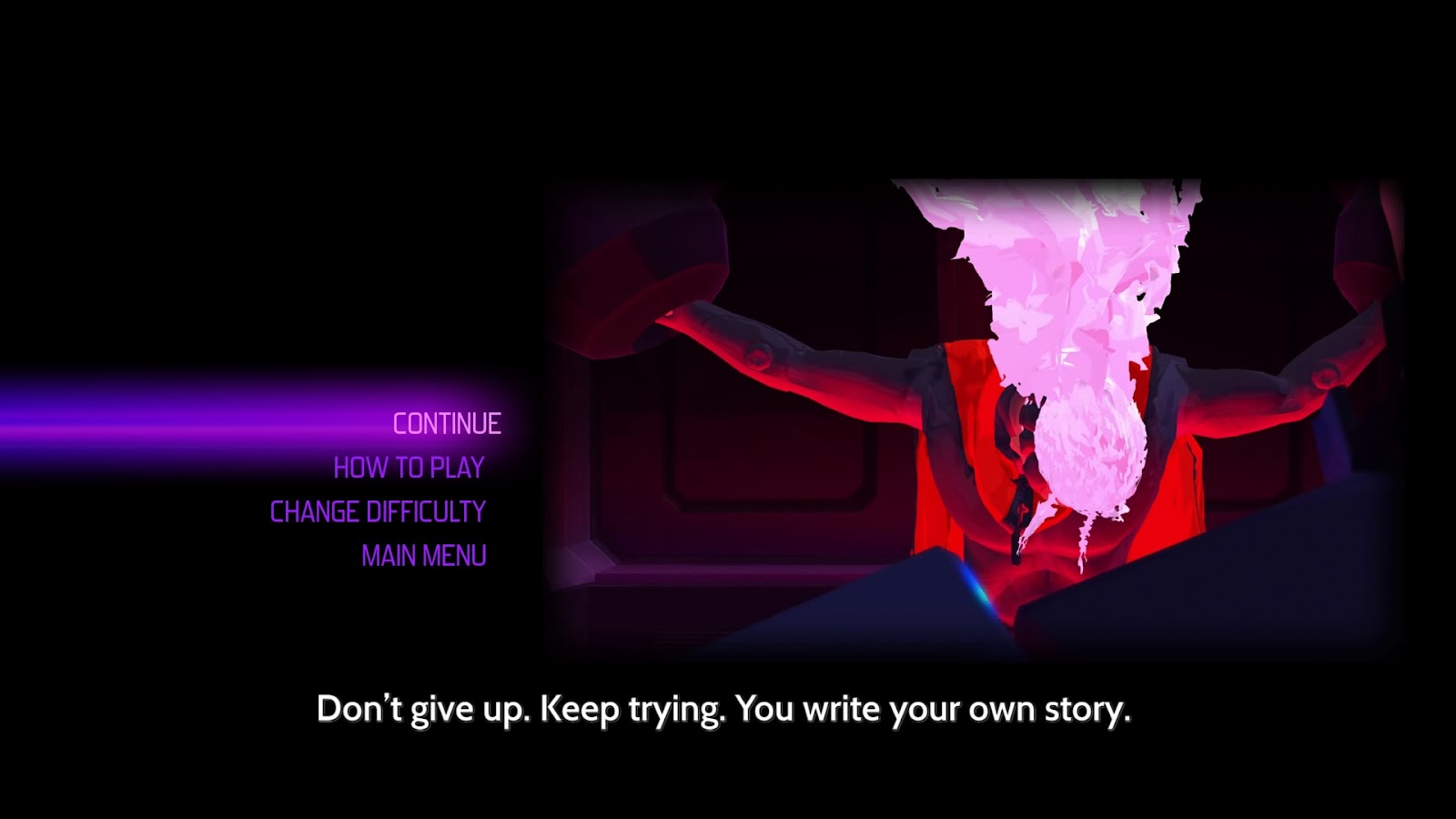 And write it I did. For now.

The spotty parry mechanic and grinding cutscenes mar what is an otherwise interesting and fun experience.

For those who get frustrated easily: 2 Swoops

For those looking for a thrilling, hard-as-nails twitch gaming experience and willing to overlook the dragging in-between moments: 4.5 Swoops