One of the first things you’ll notice about the world of Elite Dangerous is that it isn’t a world at all, but an entire galaxy. A giant, massive, enormous, gargantuan galaxy, roughly modeled on our very own Milky Way. It’s hard to convey the sense of scale you feel while drifting alone between the twin suns of an abandoned solar system, helplessly lost and out of gas, hesitantly caressing the self-destruct button.

That’s right, there’s a self-destruct mechanic. It’s designed to put you out of your misery when you’ve truly effed up in the middle of nowhere. This is the kind of game we’re talking about.

In terms of overall complexity, Elite Dangerous ranks several steps up from mainstream AAA titles, whose mindless, automatic functions can be memorized and mastered in fifteen minutes or less. But it’s not Kerbal Space Program or a Paradox title, either. No, Elite Dangerous is somewhere in between the two extremes. Picture yourself getting mildly uncomfortable with the amount of self-reliance and responsibility the game demands from you from the start, as if learning a completely new hobby. Unlike KSP, you won’t have to acquire several advanced degrees in the hard sciences to enjoy yourself, but you’ll have to at least read guides and watch videos from other gamers on the Internet to get by. Elite Dangerous is in no way a casual gaming experience, and this may turn some people off.

Congratulations, you’re a space pilot! And you better like the idea a whole lot, because you’ll never once step out of that cockpit. The game received some flak for this, but, to be fair, Elite is very literally about flying around in space, so all the criticism it received regarding a lack of human character control is way off base. That said, it certainly would be cool to see a pilot mechanic similar to the old-school days of Jetfighter III, where the player is based on an aircraft carrier and allowed to roam freely through the ship between missions. That would really open up a new realm of possibilities, instead of current system of performing all of your business and mission selection through a text-based menu. 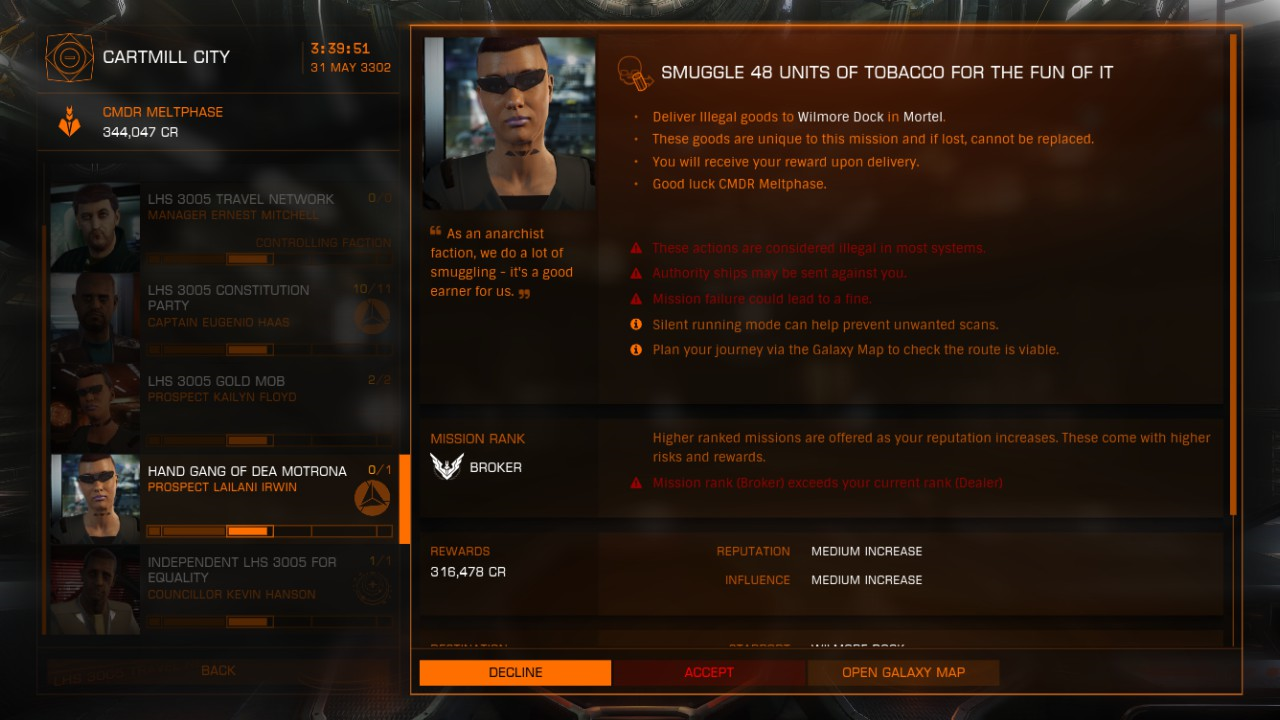 These people really know how to have fun.

There are several ways to play the game, and roles to explore within the galaxy. For instance, you can trade, fight, explore, or take missions from the major galactic powers, which may involve any and all of the previous activities. You’ll have to fit your ship to match the role you choose, as you’ll have the option to customize any internal and optional hardware. You’ll want something that can jump long distances while weighed down if you’re going to spread your space goods from one corner of the galaxy to the next. And you’ll want the best available shields and thrusters if you’re going to put your dogfighting skills to the test against ever-increasing odds. Ships differ in base stats, making them initially better at one thing or another. But there are all-purpose ships too, and they can be a great tool for a beginner to test drive each role. When you don’t know quite what you want to do when you first launch the game, that Cobra MKIII will start to look pretty appealing, as it’s great at everything and not much of a financial leap from the stock Sidewinder that you start with. 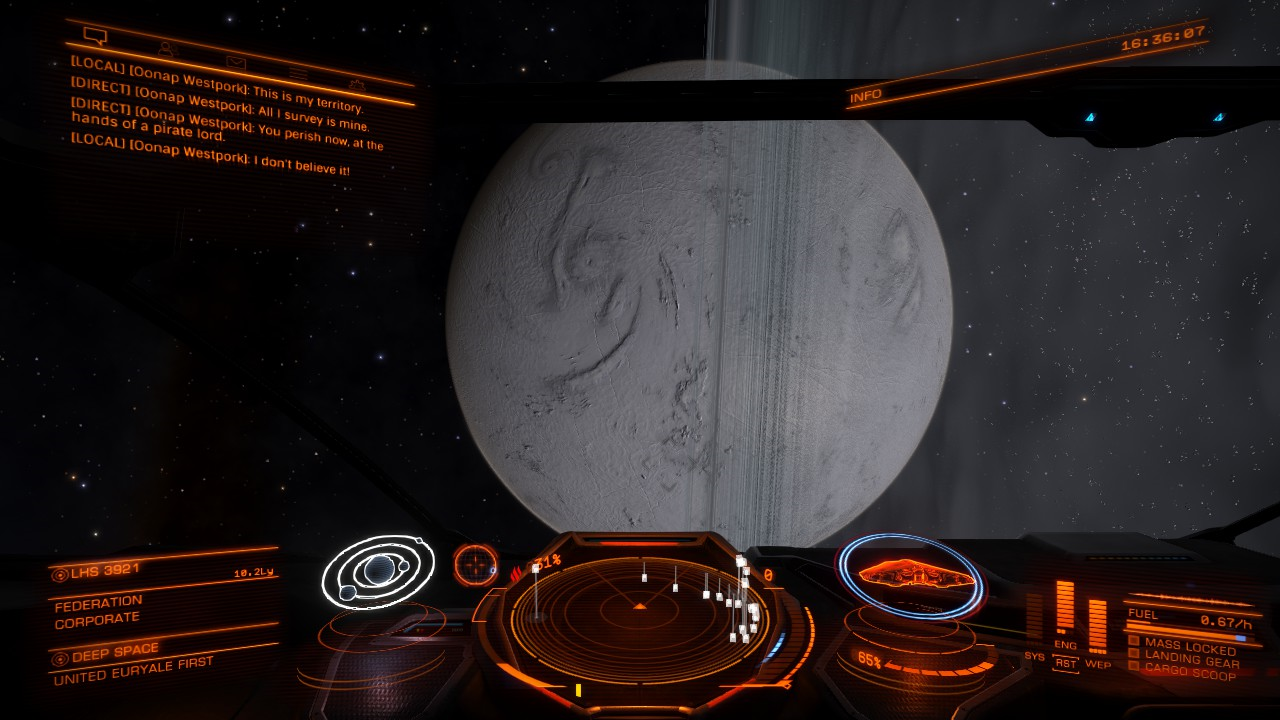 If this didn’t already sink in; the galaxy of Elite Dangerous is enormous. There are two methods of traversing the stars: Frameshift Drive and Supercruise. Your ship’s Frameshift Drive enables jumps between star systems, and the better it is, the farther you can jump without having to make multiple stops. Supercruise is a method of traveling within a system, as points of interest are still phenomenally far apart. Personally, I find myself checking the system map before I take a mission, just to make sure that the ultimate destination or dropoff isn’t astronomically far from the arrival point. The first time I popped into a system where my destination was 96,000 light seconds away was the very last. 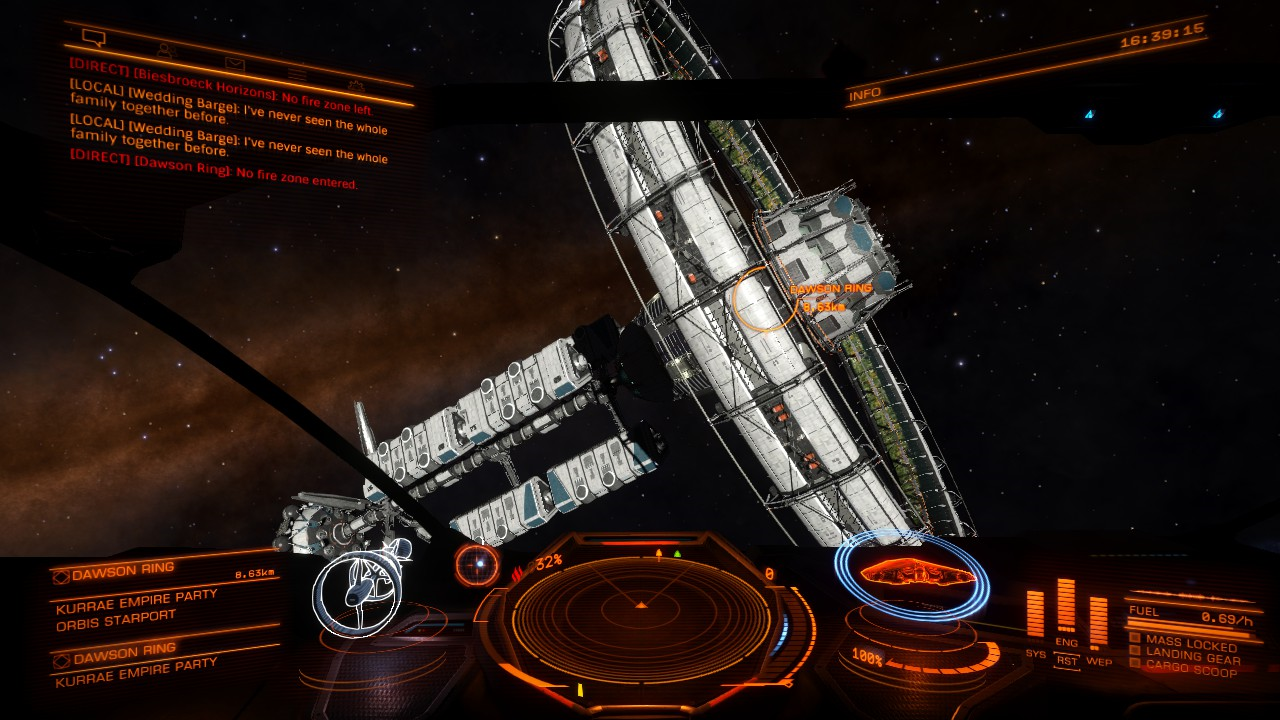 Dawson seems to have done well for himself following the sale of the creek.

Traveling around in Elite is a mixed bag. The realistic scale of star systems is a nice touch. It shows players just how big space really is, and inserts feelings of awe and wonder right into your brain stem with every jump. Ultimately though, you begin to wish for some sort of fast-travel mechanism like in Skyrim or popular MMO’s (maybe just give a list of actual games you can link to). After jumping around on a trading loop for the twentieth time, you start to understand why the more popular guides recommend pulling up your favorite show for a binge session on Netflix during gameplay.

But trading is inexplicably fun, and so far I’ve avoided resorting to Netflix myself, in favor of an attempt at full immersion into the Elite experience. And that experience is not unlike the trucker sim I used to play in computer class after finishing all my assignments for the day (what was this game?). Stepping into the cockpit to deliver some space goods after a long stressful day, flying from dock to dock, dropping off fancy industrial components and collecting bounties on any pirate who tries to forcefully take your goods is a very satisfying experience. The problem is the repetition, and the somewhat grindy nature of space travel in Elite. 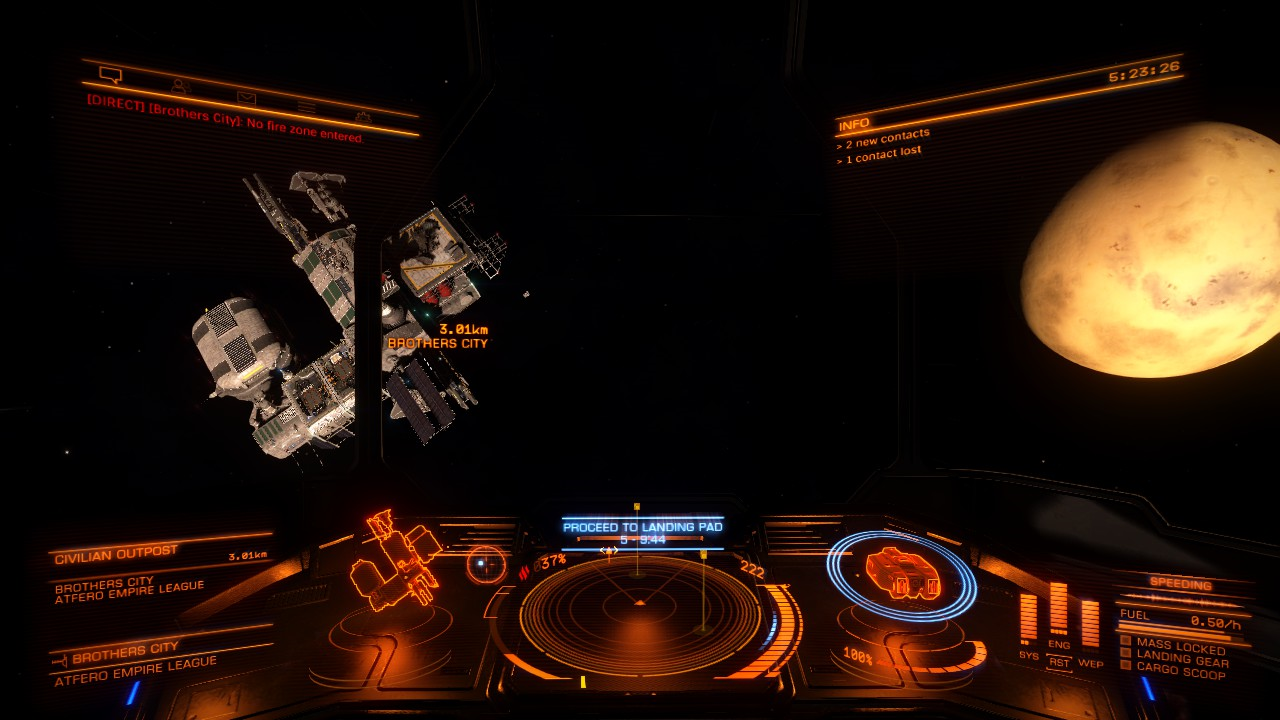 Brother’s City -- probably the headquarters of Brother’s Pizza, due to its convenient proximity to this moon made of cheese.

But that’s why we have other things to do. The biggest complaint from advanced Elite players is the grind. And the most common solution to the grind is to not give in to it, but to play the game the way you want to instead. Sure, top-tier ships are expensive as hell, and there are some convenient ways to game the system that one can easily find online -- but these usually take you into never-ending trade loops where you stop paying attention to the game you’ve paid actual doll hairs to play.

While traders will often see combat in the form of interdiction by pirates attempting to steal their space goods, there are way more direct routes to intense, 360-degree dogfighting action. The easiest way to skip right to the fight is to wait around NAV beacons for wanted ships to fly by. This is highly recommended for new players dabbling in space combat, because you get to pick and choose your bogies, and the space police will often intervene on your behalf, helping you along to an easy victory. In this way, it’s even possible to take on bigger and badder ships for larger bounties; just make sure that the space police are in position to notice your vigilantism before you pull the trigger. A late-game ship can take out a beginner ship surprisingly quickly.

The stock scanners will only alert you to ships that are wanted in the current system, but a bounty hunter can also equip an optional kill warrant scanner to travel the galaxy and hunt for ships that are wanted anywhere. Combined with an interdictor to pull bounties out of Supercruise or a Frameshift Scanner to follow them into hyperspace, this isn’t a bad way to make bank. And most of all, it can be a welcome break from running trade routes.

Taking assassination missions works much the same way, though you’ll gain the added benefit of receiving the reputation boost listed in the mission rewards. Increasing rep with various factions is the only way to rank up and buy certain faction-specific ships like the Imperial Cutter and the Federation Dropship. 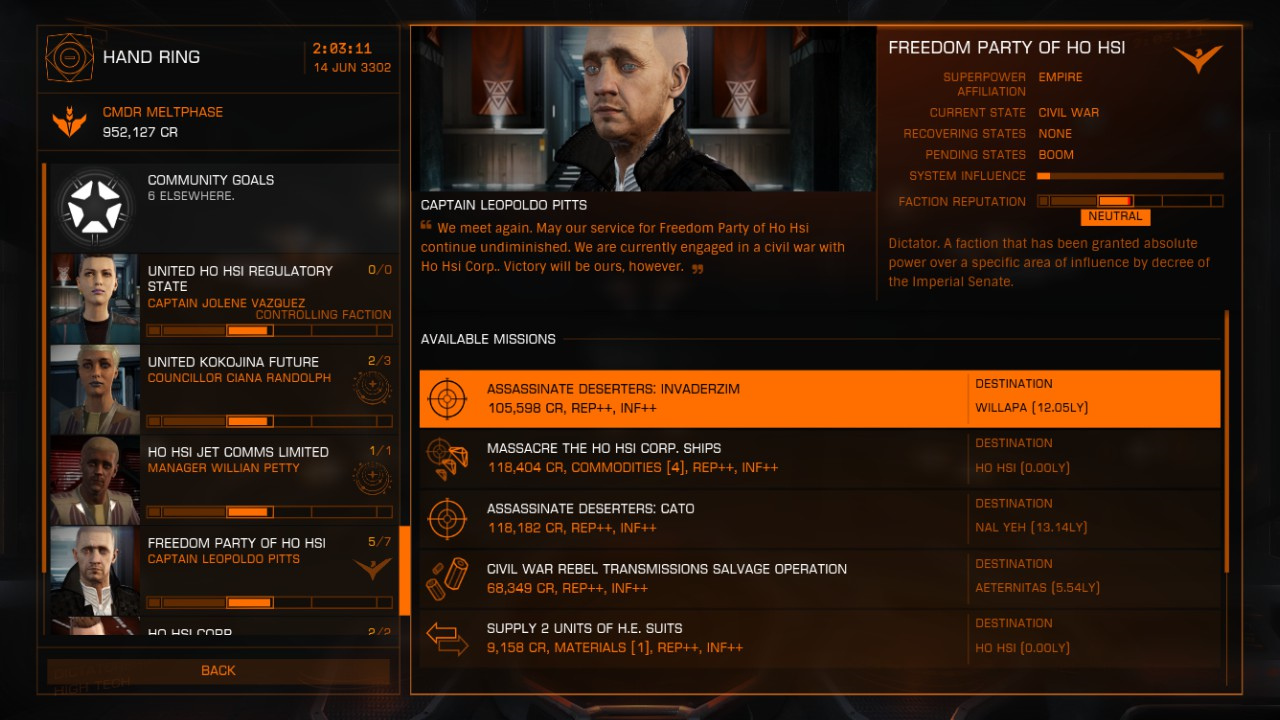 You must have to take down Zim for failing his mission to conquer Earth.

If you’re an advanced starfighter, and combat is what you crave, then you can’t do worse than taking elimination missions, where you’re given instructions by a particular faction to eliminate a designated number of opposing ships. You’ll have the best luck finding your new enemies in a system’s conflict zones. Be careful though, because as soon as you fire on a single faction’s ships, their whole faction, and whoever may be allied with them currently, will mark you as a target. Unless you’re equipped for combat and a skilled pilot, you probably won’t last long in a conflict zone.

Other places to go looking for trouble include resource extraction sites, where you can protect miners from pirates, or by letting yourself be interdicted along a trade route. If you’ve equipped yourself properly, fighting pirates along trade routes will be a welcome break from the monotony. Overall, combat in Elite Dangerous is pleasantly fun. It isn’t as visceral or high-speed as other games in the genre, but it’ll do. 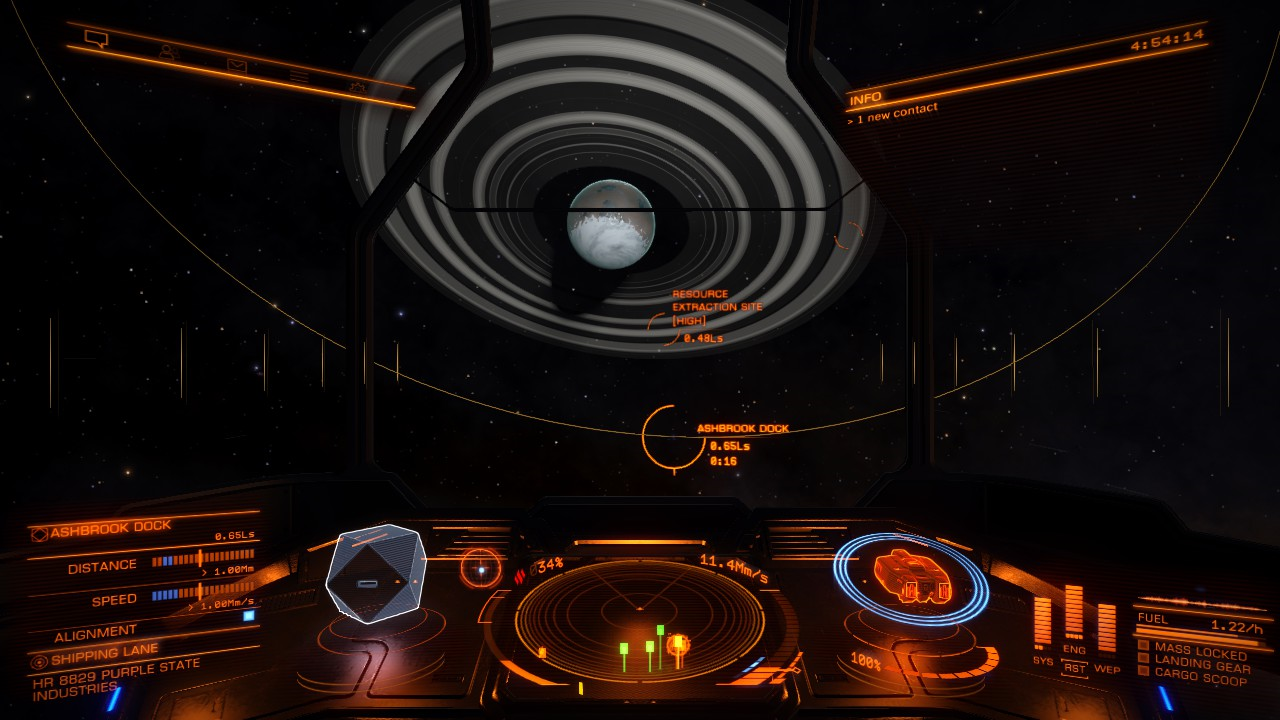 While Elite can be played with keyboard and mouse or a controller, a joystick or HOTAS setup is definitely recommended and will kick up the experience several notches. There’s nothing quite like pushing that throttle forward and maneuvering behind a helpless pirate or just zooming off between the stars. And mapping necessary buttons to the extra spots on the joystick will keep you focused on the game without having to stumble for a command on the keyboard.

Flying through space and fighting with lasers is fun by itself, but doing it with friends is even better. And the options are numerable. You can each equip mining gear and trade off on tasks as you blast asteroids to bits and sell their refined resources and split the profits. Or you can patrol a combat zone in a wing, looking for factions to utterly annihilate from the face of the galaxy. 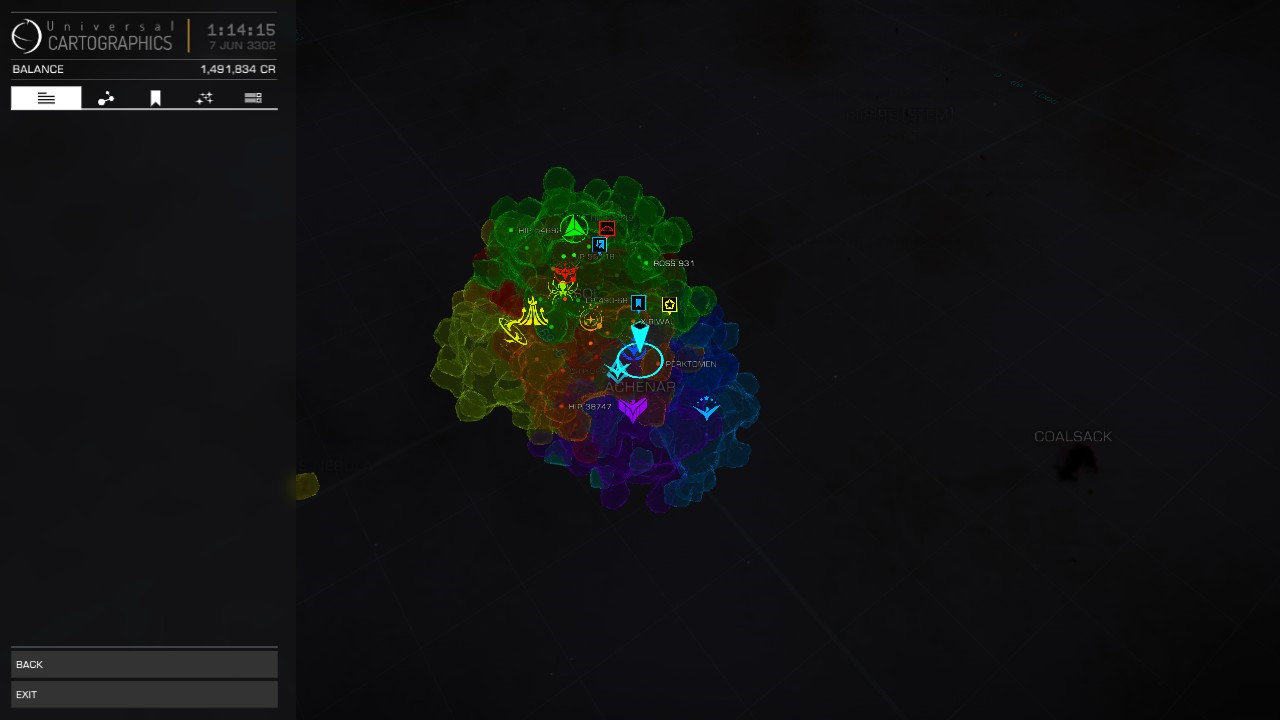 Powerplay is Elite’s system of galactic control. Each faction controls a capital, and several systems besides. Players can pledge themselves to a particular faction, in order to help that faction expand its control over new systems. The process involves three steps, each requiring the participation of multiple pilots, and is often resisted by an opposing faction whose goals may directly oppose the player’s. Powerplay is a game of galactic tug-of-war, and can be used to gain perks specific to each faction, or opted out of altogether. If independence and traveling relatively unaccosted through systems is more appealing to you, then you can choose to ignore Powerplay. But for those pilots who need the thrill of fighting for a cause larger than themselves, Powerplay will meet that need.

Overall Rating: 4 Swoops out of 5

For those who enjoy flight sims and space games: 4 Swoops